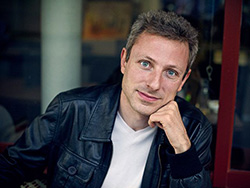 Born in Paris, Maxime Zecchini began a course of study at the "Conservatoire National Supérieur de Musique" of Lyon, in Géry Moutier's and Danièle Renault-Fasquelle's class, he earned the DNESM (Diplôme National d'Etudes Supérieures Musicales) with highest honors and special commendation (by a unanimous vote).

He is accepted at the "Conservatoire National Supérieur de Musique" of Paris in Jean-François Heisser's advanced proficiency class. He has also received the regular teaching of Laurent Cabasso and Olivier Cazal.

Maxime Zecchini is the first French pianist to receive a degree from the prestigious "Incontri col Maestro Academy" in Imola (Italy), he is winner of the international competition in Arcachon, First Prize by unanimous decision of competition of Forum de Normandie, he was awarded the Cziffra Foundation Prize and the Ragusa-Ibla competition.

He won the First Prize by unanimous decision at the international competition at Varenna-Lake Como.

Maxime Zecchini is laureate from the Marcel Bleustein-Blanchet foundation for the Vocation, as well as further awards from the Meyer Foundation, and the Mécénat Musical Société Générale. He has the label "Mission Ministérielle du Centenaire" and was also supported by the Bru Zane Foundation of Venice.

His discography includes the first Anthology in the world of the works for the left hand in 10 volumes ( piano solo, chamber's music and concertos ), multi-award-winning (FFFF/Télérama, 4 clés/Diapason, 4 stars/Classica, Le Monde, radio and tv program...), under the label Advitam Records and distributed in the world by PIAS-Harmonia Mundi.

Eclectic musician, he has also played with the singer Julia Migenes and gave "concerts-lectures" with the actress Anouk Aimée. Composer since early childhood, he has written numerous transcriptions and his original works  are published at the Editions Durand-Salabert-Universal Music.

He has played notably in the Carnegie Hall of New York in may 2022.